A Chat with Bianca

Where were you born? If not in Hungary, how did you come to Hungary? I was born and raised in Norway and moved to Hungary 3 ½ years ago to study medicine. It’s strange how I ended up here. I did my AS-levels in Preston, Lancashire, and one of my best friends was another exchange student from Hungary. I went to visit her a couple of times and fell in love with Budapest.

Which languages do you speak? I speak Norwegian (and Swedish and Danish as they are really similar), English, a bit of German and enough Hungarian to survive in Budapest. I passed my final exam in medical Hungarian, so it has happened more than once that I walk up to a random Hungarian in a bar, put on my most charming smile and tell him he has chickenpox or a throat infection in Hungarian.

What music do you like? I love to discover new, unknown artists, and somehow I mostly end up listening to Scandinavian music. (Kings of Convenience ftw) One of the latest I have discovered is Icelandic Soley. I also love to listen to electronica music like Bonobo, Air and Röyksopp. Did I mention I have a huge crush on Macklemore?

What is your favourite movie? I LOVE TARANTINO!

What do you like to do in your free time? In my free time, I do CrossFit and weightlifting. I did jujitsu for 8 years, but after I moved to Hungary I couldn’t find anywhere to do it. When I need to clear my head, I take my dog and go for a long run at Margit Island. It’s one of my favourite spots in Budapest. It’s the perfect place for everything from a romantic date to a huge picnic with your friends.

Favourite restaurants in Budapest? And why?  Castro Bistro just next to Deak Square serves some of the best food in Budapest and it’s cheap too. It’s a huge plus that they have many vegetarian options. (Yes, I’m a vegetarian in the most meat-loving country I have ever been to). They have some amazing fried cheesy rice balls that I have a constant craving for. ‘Most’ is another favourite. They serve huge portions and the atmosphere is always good. 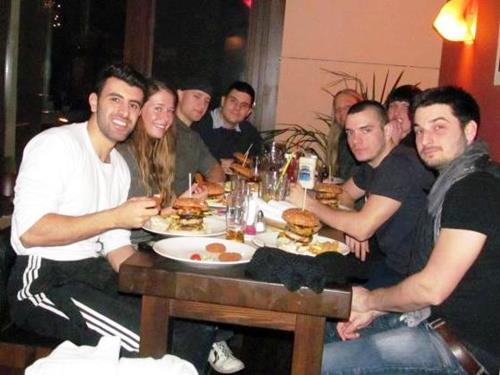 Favourite clubs/bars in Budapest? And why? I love to go on mini pub crawls with my friends in the 7th district. We go for a shot of ‘Fény’ (carbonated vodka with raspberry squash) and another shot of ‘Alattomos’ (vodka, raspberry squash and Tabasco sauce) in Buborék. Then we head to Szimpla or Ellató, which are both famous ruin bars and worth a visit. If I feel like dancing, I prefer Doboz or Ötkert.

Favourite Budapest stag activity/event and why? Beer biking because it combines beer and sightseeing! One weekend I had a group who all dressed up in crazy biking outfits. I couldn’t stop laughing. I also enjoy the pub crawls to show people the crazy and amazing nightlife Budapest has to offer. Even though I’m not Hungarian, I love Budapest and I want everyone else to fall in love with the city. 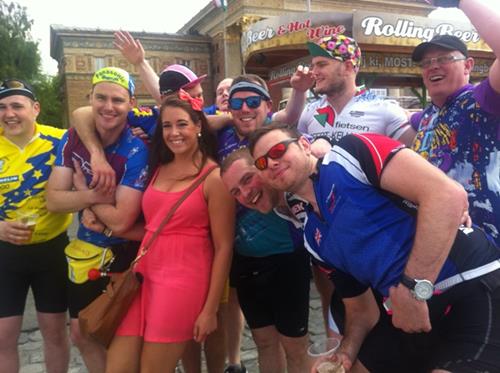 What’s the one thing you tell all your stag groups (advice)? I can never tell my groups enough times to never go to a random strip club or jump in a taxi and tell the driver to take them to a strip club. You will end up getting ripped off big time!!!
On one of my first jobs with a stag group, there was a guy who went to a dodgy place (because he didn’t listen to our advice), and he ended up getting a huge bill (£500). The bouncers walked him to the cashpoint and made him take out money. He paid half of it, ran away from them and hid under a car for hours.

What’s the funniest thing that’s ever happened to you or one of the lads in your stag group on a Budapest Stag Weekend? One time I was sitting in the back seat of a pink ‘Hello Kitty’ themed Trabant with the stag driving, dressed up as a giant penis. The whole situation was just so absurd and funny. Another time one of my groups turned out to be a male choir and gave me and the other guide a private concert singing Backstreet Boys on a boat cruise. 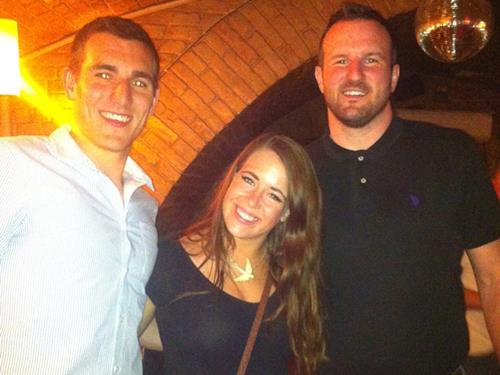