Everything you need to know about Slovak women:

True to God’s blueprint for Eastern Europe, the girls in Bratislava have to be seen to be believed. They dress to turn heads, and probably would even if they wore shiny tracksuits salvaged from the eighties. Fortunately, short skirts, tight trousers and skimpy tops are more the order of the day. 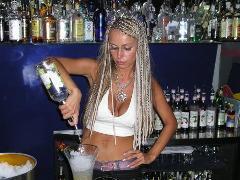 The Slovakian capital, with its relaxed vibe, narrow streets and pavement bars, is made for drinking, drooling, and generally watching the world go by. Go somewhere else for serious conversation, which will be frequently derailed by passing lovelies causing eyes and minds to wander.

By night, Slovakian girls are not only heartbreakingly beautiful, but they also love to party, and often prowl the bars and clubs of Bratislava in large groups. They love to practice their English, to chat and to be chatted up, but you will have to play your cards carefully to get anything more than an innocent peck on the cheek. You wouldn’t be the first to mistake the innocent charm of Slovakian girls for something more.

After a weekend in Bratislava, you will believe in love at first sight.